How many times do you unlock your smartphone everyday? 20 times? 50 times? A hundred? That is also how many times you have to input your PIN or password.

Photo by Oliur Rahman on Pexels.com

A four-digit PIN used to unlock a phone a hundred times in a day means 400 taps! So you’re taking the burden of inputting the same code over and over to prevent that slim chance of another person accessing your phone without your consent.
I chose not to use any PIN, pattern lock or password to secure my phones so that I can use them with a single swipe. Here are the reasons why:

At any rate, the key fallback measure is to be able to access the Internet immediately after you lose your phone. Without it, don’t dare leaving a PIN-less phone lying around.

Five days after Lazada delivered my Cubix Cube Lite, I can say that this phone is well worth its price. The specs are reasonably sufficient for general use. It looks like an enlarged Xperia Go with its bright display, textured back panel, rubber slot covers for SIM & microSD, and its light weight. It takes a while to figure out how to uncover the SIM slot at first. 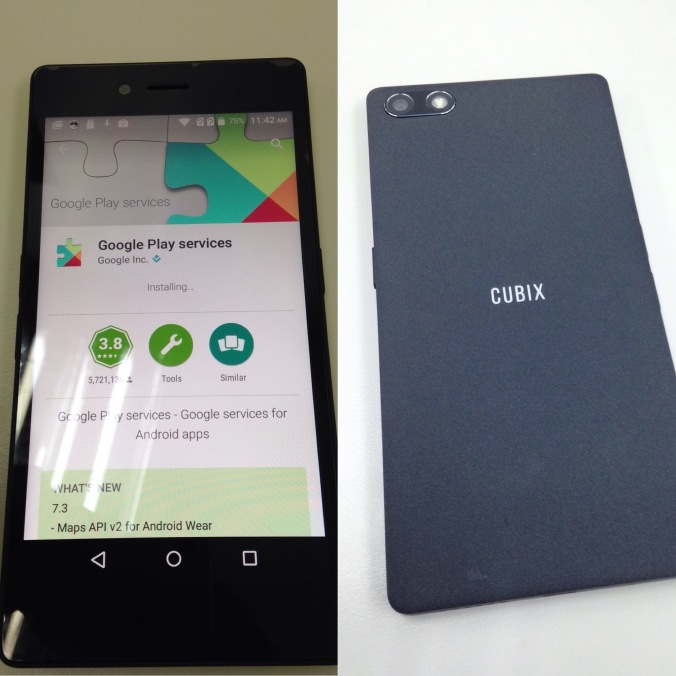 Performance-wise, the experience is smooth for most of the tasks but it sometimes lag when several background apps start to pile up. Obviously, its not designed to be a gaming phone.

The internal speakers and the bundled headset are nothing to be desired. But when I plugged in an Apple Earpods, the Cube Lite was able to pump out acceptably good music with ample bass.

Photographs produced by front and back cameras cannot compare to those from mid-range phones in the market but will be acceptable to those who are just starting with smartphone photography.When manually focusing objects on the camera. Ther

Battery lasts more than 2 days with light use (like 1 hour of music, 1 hour of FM radio, occasional social network checks via wifi and a few dozen texts per day) but can easily get consumed up in less than a day with heavy use.

Out-of-the-box configuration isn’t very polished so I installed Microsoft’s locker and launcher and disabled a few pre-installed apps that I don’t use (Kakao Talk, Talkback, TouchPal, live wallpapers, etc.). The end-result is a satisfactorily usable smartphone that is light in the pocket both literally and figuratively.

(I wrote this article in 2008 when I couldn’t contain my ire with the Arroyo regime.)

When I delivered a commencement speech to a batch of graduating sixth-graders a year ago, I emphasized the fact that there are more shakers than movers in this country. We barely grow as a nation because, as I said in Filipino, “maraming bumabatikos habang kakaunti ang kumikilos.”

Now I can’t help but to rant and rave as the inefficiencies and fiscal irresponsibility of the government become more apparent than ever. We had the controversial NBN ZTE, overpriced Macapagal Boulevard, fertilizer scam, Glorietta 2 bombing, Manila Peninsula siege, Oakwood mutiny and everything else that could not fit within broadsheet pages. Our children seem to have seen more bombs than books.

The rich and the poor are not equidistant from resources, opportunities, and the power to influence. The lack of insight resulted to severely congested roads, overcrowded trains, Band-Aid assistance to the poor through short-term subsidies, and economic growth we could not be proud of.

The government is busy with peace talks and in advocating Charter Change while the Filipinos just want to seek a safe home and to fill their grumbling stomach.

Photo by Oscar Chan on Pexels.com

Our current situation is very reminiscent of the movie “Tears of the Sun.” No wonder we’re winning international film competitions — our daily existence is movie-quality in Hollywood.

Image editing softwares have gone through impressive innovations that their features are now a powerful tool in politics. Scams are being masked, public service is being cropped, government’s transparency is doubtful, decisions on controversies are rotated and political allies are favored like lasso selection. And for anything else that cannot be explained, there is the magic wand — in one blink of an eye, the witnesses are gone. I wonder if there will soon be a healing brush.

In the world of MacBooks and WiMax, the government’s performance is comparable to Commodore 64 with 56k modem. Unfortunately, the people’s memory about lessons from politics are just like RAMs — easily erased at the slightest power outage.

We had enough of Photoshop politics and Dreamweaver democracy. Don’t we deserve the Philippines Version 2.0?

Some of us cannot see the future of the Filipinos. I can. Despite redundant editing, it is still blurred. And no amount of digital editing can fake it. We need a new programmer.